The many types of hash – Hash has been a popular pastime for many throughout the world, and with contemporary technology, we can now access to a large number of distinct varieties.

There are a variety of different kinds of hashish to try around the world, but there is a forgotten craft to hash in the traditional and old-school method.

The Royal Nepalese Hash Balls are one of hash’s most unusual varieties, standing out from the rest. For hash connoisseurs in the 1970s and 1980s, Nepalese Temple Balls were a coveted find, which has been enjoyed by only a few.

What is a Nepalese Hash Ball? Imagine a smooth, somewhat sticky, soft, dark coffee-colored sphere with a glinting shine in your hands. This is what a Nepalese Temple Ball looks like.

The hemp hash is a visually stunning thing to behold, sort of resembling a gleaming stone or deep marble with a mirror-like finish at specific angles.

As you make your way through the Royal Nepalese Hash, a smooth and creamy texture becomes apparent, just like that of a freshly baked red velvet cake.

The Royal Nepalese Temple Ball is also known to act like a stallion, with a THC concentration of around 55-80 percent, and is capable of transporting you to legendary heights of highness.

For individuals seeking a nicer fragrance, this is an excellent option. You get a fragrant scent with subtle tropical fruity and earthy undertones that envelopes the olfactory senses with great power when you combine it with its strength.

Where to Find Nepalese Hash

Unfortunately, the Royal Nepalese Temple Ball is a vanishing breed of hash in North America. The ideal method to consume them is to grow them at home.

So, if you ever get the chance to create and enjoy one, make the most of it!

The Origins of the Nepalese Temple Ball

The Royal Nepalese Temple Balls have been native to the region of Nepal for hundreds of years. Cultivators originally grew Indica-dominant strains on the Nepalese Mountains and harvested them for the creation of the hash.

Nepalese Temple Balls are known for their tropical fruit flavor and subtle earthy scent, which is characteristic of all the many types of hash available.

Of course, the type of cannabis strain used to make the hash will have a significant influence on its effectiveness and flavor.

Nepalese Hash is a type of refined cannabis with a high THC content of around 55-80 percent, which can sometimes quadruple the concentration of high-quality cannabis cultivars.

The Nepalese Temple Balls are smooth and fragrant, with a velvety feel and taste that is best appreciated in a glass pipe, dab rig, or even sprinkled on top of flowers.

The Nepalese Temple Ball, on the other hand, is a whole-plant cannabis concentrate that provides the complete experience of the plant without any parts being removed, making it an excellent all-natural concentrate.

However, be careful handling this sort of hash since it is sticky to the touch and may be difficult to remove.

How Temple Balls Are Made 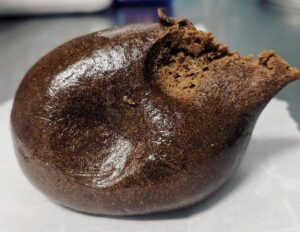 Two simple ingredients are all you need to make the Royal Nepalese Temple Balls: fresh dried cannabis and your two hands.

Dried cannabis was originally rubbed and agitated with the hands to release the trichomes and resin from the bud onto the palms. The hands will be sticky to the touch once enough resin has gathered in them.

The resin would be rolled into a ball until it had the consistency of bread dough.

The Best Types of Hash in The World

How do Nepalese Temple Balls compare to other types of hash? To fully appreciate the many forms of hash available throughout the world, you must first understand the origins and customs behind each method of production.

Others may prefer a more aggressive, cutthroat approach in contrast to a more nuanced and selective one. The choice is ultimately yours.

Nepalese Temple Balls are considered to be somewhat average in terms of potency when compared to other types of hash.

However, the majority of them are more powerful than your basic marijuana buds. They can easily hold a beat to their more potent brethren like honey oil or CO2 extracted concentrates, but they’re not always the most effective cannabis products.

The Nepalese Temple Balls are generally regarded as a step or two above other hand-crafted techniques such as Finger Hash or Kief Hash.

The extra time required to process the buds results in a more fragrant and potent product, with the exception that it takes some time to produce.

For individuals who want to experiment with making hash at home but don’t want to invest in equipment, hand rolling may be a good place to start.

Crack, rosin, and bubble hash are all fantastic starting points for people who want to be extra creative.

Those who don’t mind putting in a bit of extra effort may get excellent results from solvent extract distillates like Honey Oil.

Types of Hash – In Conclusion

When it comes to selecting the finest hash for oneself, you are the one who makes the decision. We hope that this essay has shed some light on both the historical significance of hash and the Royal Nepalese Temple Balls.

Today’s technology has opened the door for a plethora of new hash goods to be developed for the current cannabis user, so keep your eye out for the latest and exciting. As usual, have a nice day!