HomeUncategorizedCannabis Albinism And Its Effect

Cannabis Albinism And Its Effect

Cannabis Albinism And Its Effect

The sight of white, sparkling buds bursting forth with streaks of crimson calyxes is magnificent. But what causes such a consequence?

No, it’s not simply a Photoshop job. Cannabis plants with a pure white color do exist and do so from time to time. However, this isn’t always the case (most of the time). Albinism is what causes pure, brilliant white cannabis plants. It’s caused by a lack of pigment in the same way that albinism occurs in animals.

Although albino cannabis plants may have a beautiful and stunning appearance, it is actually a significant genetic drawback. The pure white aesthetic is an indication of a substantial lack of chlorophyll, implying that albino plants are unable to photosynthesis.

So, Is Albino Weed Real?

Although photographs of albino cannabis and white marijuana strains can be found on the Internet, the survival of an albino marijuana plant is probably a hoax. It’s unlikely that an albino plant could live long enough to develop buds because it lacks sufficient chlorophyll. Cannabis albinism is basically a genetic defect that will prevent your plant from growing. Even if an albino cannabis plant was able to survive and produce flowers, its buds would contain little THC due to the lack of nutrients it received throughout development.

White Cannabis: How Is It Possible?

Cannabis with white flowers, however, does not always indicate albinism. It may be caused by a variety of factors, including light bleach, powdery mildew, and as a consequence of crossbreeding strains. 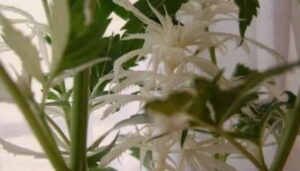 If you notice areas of your cannabis plant becoming white, it’s possible that the leaves have been exposed to light bleach. When your plants are overly subjected to direct, consistent light at high temperatures, light bleach occurs. Because these are the parts of the plant that receive extended exposure to direct, artificial light, they are most likely to acquire this discoloration. Light bleach is a rarity in outdoor cultivation; however, it is commonly an indication of indoor growth. Learn how on how to deal with light burn in our article.

The Cause of Cannabis Albinism

You could be asking, “What causes cannabis albinism?” However, this event is quite uncommon; many people have been able to observe it in plants all around the world.

Cannabis albinism occurs as a result of a recessive gene in the cannabis plant. This will make the cannabis plant appear weaker than usual since it will be unable to photosynthesize owing to a lack of chlorophyll. Some plants are not completely albino, but certain areas may be, and you can see the white characteristics of those sections while the other parts are developing normally.

Cannabis albinism is caused by several factors in the environment, particularly exposure to light. It will have an influence on parts of the plant that are developed indoors, especially those that are close to a grow light.

Outdoor cannabis plants are unlikely to experience this. When the plant is subjected to excessive light, the chlorophyll in it will be destroyed. If you detect cannabis albinism as a result of insufficient light, increase the nutrients and modify the lighting.

The Effect of Having Albinism

Because chlorophyll is so important in the photosynthesis process, a cannabis plant with albino features will have to put out more effort in order to convert light into energy. As a result, your plant may grow slower and produce fewer fruits.